Yesterday & today: 2014 No 12
JavaScript is disabled for your browser. Some features of this site may not work without it. 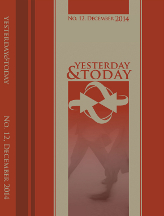 Although this is not a special edition of Yesterday&Today, it is nevertheless special in the sense that the editorial panel is privileged to dedicate the issue to Professor Elize van Eeden for her enormous contribution to, and involvement in, the continuance and success of the Journal.

Elize's association with Yesterday and Today/Gister en Vandag started 33 years ago in 1981 when she was a final year undergraduate student at the former Rand Afrikaans University. As one of the students of Professor Martin Trümpelmann, who was her History didactics lecturer and a founder member of the Journal, Elize and her peers were involved in the editing of the first issue. They were occasionally also asked for contributions to later issues of the Journal in the form of exemplar lessons and/or debate conversations.

Much later, in 1996 as a young member on the Executive of the South African Society for History Teaching (SASHT), she became aware of the financial and membership difficulties experienced at the Journal (then edited by Professor Pieter Kapp of the University of Stellenbosch). When the Journal finally seized to exist in 1997, Elize was the secretary of the SASHT. As a passionate History educator she refused to give up on the Journal, and decided to become part of a team of individuals who started a regular Newsletter in an effort to keep the loyal SASHT and Journal members informed about innovative teaching matters and classroom practices.

It was only in 2006 that Elize decided to take initiative and apply for funding from the North-West University to revive the Journal. Her continuous efforts were successful; and her editorship officially started in 2006 with a special issue of the Journal, and under a brand new name Yesterday&Today. Initially, the Journal only appeared once a year (except for 2008 when two issues were published). During this time, Elize edited almost all of the articles singlehandedly, and managed the Journal on a scant budget.

In January 2012, after hours of writing tireless motivations and having multiple discussions with the staff of The Academy of Science of South Africa (ASSAf ), she managed to secure accreditation status for the Journal from the Department of Higher Education and Training. Shortly, after this achievement the journal was placed on the open-access Scientific Electronic Library Online (SciELO) platform which is a full-text journal database for South African scholarly journals. Elize was also instrumental in the creation of the SASHT website on which Yesterday&Today is available in digitalised format - since the first issue in 1981.

At a time when the Journal is being published bi-annually, and is generating its own funding, Elize decided to step down as editor in June this year (2014). Fortunately, she was still willing to stay on as a member of the editorial panel, and will be responsible for the financial management of the Journal.

By dedicating this edition to Elize, the editorial panel is acknowledging her invaluable efforts and inspiration over the years to secure the survival of Yesterday&Today; not only for the current, but also for the future generations of History educators.

In this edition of Yesterday&Today, the articles focus on a variety of pedagogies, or practices of how best to teach H(history). These are the reconciliatory pedagogy (Reville Nussey, Elize van Eeden, Kevin Garcia, and Joanna Wojdon), an inspiring pedagogy (Gordon Brookbanks and Maxine Gibb), and, an educational excursion pedagogy (Wendy Carstens, and Johann Strauss and Louisa Meyer,).

In her article, Elize van Eeden presents The Miracle Rising® as source for teaching History: Theoretical and practical considerations. She focuses on ways in which parts of this 92 minute historical documentary, which traced South Africa's political transformation to the first free and fair elections in April 1994, can be utilised as a teaching and learning source towards building the"rainbow nation". She exchanges valuable ideas on ways in which GET, FET and HET History educators can theoretically and practically utilise this visual medium in the assessment of their learners and students respectively.

The article of Kevin Garcia offers Grade 12 History teachers supplementary information to Topic 3 of the CAPS document, entitled Civil society protests 1950s to 1970s. An aspect to be covered under this topic is a case study of the US Civil Rights Movement. The article focuses on a lesser-known aspect of the same period, namely the American Indian Civil Rights Movement; and opens up the possibility for the enrichment of the learners' history study by providing a broader context for the topic specified by CAPS, and for conducting a comparative historical analysis with the learners.

Joanna Wojdon's article deals with school History textbooks and the issue of one "scientifically approved version of what did happen" versus "presenting multiple perspectives on how it can be remembered and why." Textbooks in Poland, like in many other countries of the world, have for a long time been the major pedagogical tool in History classrooms, and as such they had, and still have, a major impact on the History teaching process, society at large, and the collective memory of its people. Wojdon illustrates the problem with a case study of a controversial issue, the introduction of Martial law in Poland. She argues for avoiding controversial topics and to concentrate on proven facts and interpretations.

Relating to an inspiring pedagogy, Gordon Brookbanks in the first handson article entitled, Inspiring students: getting the recipe right contributes to the inspiring pedagogy when he invites teachers of History to work on their classroom techniques and methods to inspire the learners in the classroom. He identified the advantages of teachers getting "... the recipe right ...", namely personal enjoyment, increased understanding, and the necessary skills to achieve results. The focus should also be on introducing "other voices" into the History classroom, i.e. invited speakers to share their curriculum-relevant stories and experiences with the learners, and to promote among other things active citizenship and critical conversation.

Maxine Gibb, who was the top student in the Western Cape in the National Senior Examination for History in 2013, shares her personal experience in her article, Achieving results in History and the role of the teacher: A learner's perspective. She builds on McEwan's traits for a highly effected teacher and reveals how her history teachers' personal, intellectual and teaching traits inspired her passion for history, and contributed to her academic success. Her contribution to inspiring pedagogy is invaluable.

Within the parameters of the educational excursion pedagogy, Wendy Carstens' article entitled, The value of tours around heritage sites with Melville Koppies as an example demonstrates the importance and advantages of educational excursions to historical and heritage sites. She illustrates how learners could benefit from these tours - enrichment, reinforcement, inspiration, appreciation, and skills promotion. She also provides the what and how of a guided tour to the Melville Koppies, a nature reserve and heritage site near Johannesburg.

In the last hands-on article, Historic Environment Education - tunnels: the forgotten history of the early days of coal in the Vereeniging area, Johann Strauss and Louisa Meyer also contribute to educational excursion pedagogy. They focus on the topic of the transportation of coal to the diamond and gold mines. In a history that has not yet been comprehensively documented, they describe how tunnels below the Vaal River were utilised to transport coal to all areas of the Transvaal. An explanation follows of how the historical content by means of a specific task on tunnels and the transportation of coal (that includes an excursion to the heritage sites) can add value to the historical environment education of Social Sciences, History and Geography learners.

In the book review section, Jean Léonard Buhigiro critically reviews Hamilton Wende's, Valleys of silence into the Rwandan genocide published in 2014 by Sunday Times Books. This is followed by Kevin Garcia's review of Understanding and Teaching the Vietnam War (The Harvey Goldberg Series) edited in 2013 by John Day Tully, Matthew Masur and Brad Austin, and published by the University of Wisconsin Press.

Apart from the above contributions, this edition of Yesterday&Today also includes information on the 2014 SASHT's conference programme, and which was held at the Wits School of Education from the 10 to 11 October 2014. A conference summary of the chairperson of the SASHT, Prof Elize van Eeden, is also included. This edition of Yesterday&Today is concluded with a comprehensive SASHT regional report which elaborates the activities of the regional representatives in the different provinces of South Africa.