New Contree: 2014 No 71
JavaScript is disabled for your browser. Some features of this site may not work without it. 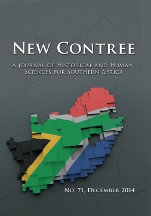 In the December Issue 71 of the New Contree a departure is made with contributions from Botswana, followed by several cultural-specific research exposés. In White man's disease, black man's peril?: Rinderpest and famine in the eastern Bechuanaland Protectorate at the end of the 19th century Phuthego Molosiwa dusts off the already well researched Rinderpest of the late nineteenth century, and its impact on Southern Africa. Needless to imagine to what levels this pandemic obstructed human life (financially and socially). Food insecurity threw farmers into a state of desperation. In the article Molosiwa critically explores rural communities in the eastern Bechuanaland Protectorate at the time of the Rinderpest outbreak. Features of diffident scenarios in cultural and social life and the introducing of new strategies to cope in specific situations are conversed.

Fred Morton takes the reader on a very captivating journey in The Rise of a Raiding State: Makaba II's Ngwaketse, c.1780-1824. Informative research on the significance of the Ngwaketse to regional developments in the predifaqane is exposed. Amongst others, but also very much in the present day territorial paradigm of doing regional history, Morton points out that the Ngwaketse, in the process of conquering the southern parts of Botswana in the mid eighteen century, did not only build an impressive regional state, but they also efficiently utilized and adapted to the landscape they have colonised.

After a bulky special issue in November 2014 on aspects of KwaZulu Natal's regional histories, another afterthought (but surely no less in value) appears in the December issue through a team effort by Goolam Vahed and Thembisa Waetjen. In Moon sightings and the quest for Muslim solidarities in twentieth century Natal the authors reflect Muslim community contestations over Ramadan moon sightings in twentieth century Natal. They debate moon sightings as a space for arguing authority, identity, Muslim unification and the role of science and technology in Islam traditional as well as modern thought.

Another debateable contemplation is made by Loraine Maritz in An unlikely union. Exploring the possibilities of Afrikaner and black women's organisations cooperating in the Women's National Coalition, 1991-1994. She argues that against the normal flow of past findings that differences among women do not normally prevent coalition building opportunities, the history for Afrikaner women and black women in the Women's National Coalition proved otherwise. In many ways Afrikaner women is criticised by Maritz as the section who could have made a difference if political perceptions and connotations with respect to whom they are (or are said to be) did not in the process mentally impacted on them.

Midas Chawane, in The appearance and significance of Rastafari cultural aspects in South Africa, argues the popularity levels of Rastafari cultural features in symbols and language during post-apartheid times. Another cultural-specific socio-environmental history contribution of interest is that of Christina Kgari-Masondo on Sotho-Tswana Mythic animals: Stratagem for Environmental Conservation. She claims that in pre-colonial times Sotho-Tswana leadership attached to some animals a mythological meaning as part of a process to preserve such fauna. A plea for veracity on the mythical paradigm, through ethical-like actions from a historical angle, is made.

Book reviews that feature in this issue worth noting are the i) 2013-publication by Dan Sleigh and Piet Westra (The taking of the slaver Meermin, 1766), the ii) 2014-book by Dennis Cruywagen on Brothers in war and peace: Constand and Abraham Viljoen and the birth of the new South Africa and iii) Gert van den Bergh's 2013 contribution titled: Die Anglo-Boereoorlog in die Potchefstroom omgewing.

During the past year a total of 25 articles were accommodated in the New Contree, and several book reviews were done. The research community in the humanities and social sciences are encouraged to continue entrusting their research harvest to the New Contree which aims to continue serving its contributors and readers with quality research articles on especially Southern Africa.