Yesterday & today: 2016 No 16
JavaScript is disabled for your browser. Some features of this site may not work without it. 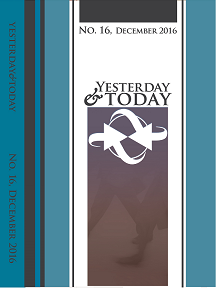 In the 2016 December edition of Yesterday&Today educators of history can look forward to a variety of thought-provoking and insightful research articles on history theory and critical pedagogy. The scientific research section contains topics such as the need for multi-perspectives, oral history and historiography in a history course for preservice teachers; the politics of gendering decolonisation and decolonising gender within the framework of the South African history curriculum; an analysis of the depiction of women in a Malawian history textbook; utilising the Stone Age for sport historical teaching; and a historical survey of the development of Afrocentricity. The two articles in the hands-on section refer to valuing heritage and teaching good citizenship in schools in a post-colonial, post-apartheid era, followed by possible methodological approaches in the teaching and assessment of Holocaust history and the theories of race.

In the first scientific research article entitled, A history teacher educator’s reflections after classroom observations: the need for multi-perspectives, oral history and historiography in a history methodology course, Reville Nussey argues that with South Africa’s contested past it is important for preservice teachers’ historical consciousness to develop in order to present a multiperspective view of history in their classrooms once they become practising teachers. For this to happened Nussey believes a shift is necessary in history teachers’ teaching and learning from a one-dimensional approach that splits “fact” and interpretation to a multi-perspective view which allows for the interrelationship of interpretations and “facts”. After observing practising teachers - who were former preservice teachers - teaching a history oral task, Nussey decided to recommend changes to an existing history methodology course. He suggests that for preservice teachers to understand the different interpretations of the past, it is necessary to link their oral history narratives to an understanding of aspects of historiography.

In the first of the two articles relating to woman and gender, The South African high school history curriculum and the politics of gendering decolonisation and decolonising gender, Lindsay Wills argues that gender and gender theory should form an integral part of a decolonised history curriculum. She critically analyses to what extent the Curriculum and Assessment Policy Statement (CAPS) satisfies the basic requirements put forward by feminist historians and gender activists, finding the current curriculum lacking in expectation. She convincingly claims that the curriculum fails to effectively capture the deeper complexities of women’s experiences and contributions within a historical context of race interacting with class and gender. Wills concludes that gendering history in a decolonised South African curriculum would require the revisiting of many of the topics to analytically explore and establish how gender has functioned as a significant axis of power.

Annie Chiponda and Johan Wassermann in their article entitled, The depiction of women in the verbal text of a junior secondary Malawian history textbook – an analysis, explore ways in which women are depicted in the textbook studied and also seek for reasons why they are depicted in this way. Drawn on the feminist theory, the verbal text of the book under discussion was qualitatively analysed. Their research findings show – as is also the case globally – that women are under-represented, marginalised, subordinated, oppressed and stereotyped in various ways. Due to teachers and learners often considering textbooks to be authoritative and accurate, Chiponda and Wassermann caution that these portrayals will send out negative and distorted messages about women. In conclusion the authors recommend that the junior history syllabus and textbooks be revised and updated to be aligned with the Malawian constitution and legal policies aimed at promoting gender equality.

In his article, Utilising the Stone Age for sport historical teaching, Francois Cleophas maintains that students are generally resentful when they are expected to study sport practices of ancient civilisations, such as the Stone Age period. He succeeds in converting historical knowledge into pedagogical communication by combining the Canadian Benchmarking project with the revised Bloom’s taxonomy for teaching ancient culture to undergraduate students of sport history. Students were requested to utilise various activities that involve their cognitive, affective and psychomotor domains to compile a narrative of ancient sport practices in pre-colonial “Stellenbosch”. The article concludes with the students’ reflection on their experiences in the creation of their narratives. In the process some interesting suggestions for future pedagogical activities of this nature were also made.

In his article, The development of Afrocentricity: A historical survey, Midas Chawane maintains that although the origin of Afrocentricity as an idea and philosophy cannot be established with certainty, it is nevertheless clear that the ideology emerged in reaction from African scholars challenging the traditional Eurocentric perspective that places Europeans’ contributions at the epicentre and downplays or excludes the role played by Africans in world history. Although admitting that Afrocentricity is a controversial issue and investigating the criticism levelled against it, Chawane believes it should become part of an on-going academic debate. He argues that such a debate will help to seek solutions for the current problems and demands at some universities where the call for a decolonised curriculum are made.

In the first hands-on article entitled, Some considerations for History teachers in acknowledging and valuing heritage and teaching good citizenship at schools in a post-colonial, post-apartheid era, Paul Haupt emphasises the importance of taking cognisance of the multi-faced perspectives of heritage within the school community. He argues that educators, and especially History teachers, have an important role to play to reflect in their writing and teaching the pride that the preservation of local history instils in communities. He believes that a healthy debate between the various segments of society (of which the school is but a microcosm) regarding differing perspectives on heritage is essential. When tolerance and mutual respect and recognition for different opinions are acknowledged and consensus can be reached on a common humanity, Haupt believes it will cultivate a sense of belonging that will ultimately foster good citizenship.

In the second hands-on article, Assessment in the teaching of Holocaust history and theories of race, Lesley Cushman draws on the contributions of various scholars and bodies when teaching difficult and controversial histories. She argues that when teaching and assessing this particular kind of content, it has to be well thought out and cannot merely be seen as just another academic exercise. She examines four Grade 11 History textbooks by performing a rigorous analysis of sample questions to illustrate the difficulties commonly encountered in the teaching and assessment of the topic “Theories of race”. In the process, Cushman provides insightful suggestions on assessment strategies and aspects such as the interpretation and phrasing of assessment questions, impartiality and neutrality. Cushman’s contribution will undoubtedly be of value to teachers teaching and assessing content within the context of the human rights History classroom.

In the book review section, Leevina Iyer critically reviews Michael Morris’s, Every step of the way: The journey to freedom in South Africa. This is followed by Bafana Mpanza’s review of Phillip Kgosana’s autobiography, entitled, Lest we forget: An autobiography.

Apart from the above contributions, this edition of Yesterday&Today also includes information on the South African Society for History Teaching’s (SASHT’s) conference programme. This conference was held from 6 to 7 October 2016 at Pine Lodge in Port Elizabeth. The presidential speech of the chairperson of the SASHT, Prof. Elize van Eeden, is also included. Furthermore, a photo collage can be seen that was compiled of those who attended the conference. This edition concludes with a SASHT regional report which elaborates on the activities of the regional representatives in the different provinces of South Africa.

Finally, the International Society for History Didactics (ISHD) in conjunction with, the SASHT: as host, is pleased to announce that the annual conference in 2017 will be an international conference, and will take place from 13- 15 September 2017 at the Riverside Sun Hotel, cor. Wenning and Emfuleni Drive, Vanderbijlpark. See included on the last pages the conference... The conference theme and call for papers will be announced during January. Also consult the SASHT website for updated information on this conference.