New Contree: 2016 No 76 (Supplement Edition)
JavaScript is disabled for your browser. Some features of this site may not work without it. 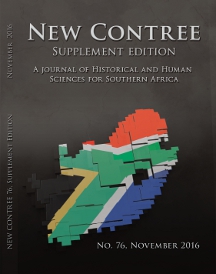 Aspects of the history of the (Orange) Free State

In this special edition of New Contree, light is shed on several aspects of the history of the Free State Province (until June 1995 known as the Orange Free State). This is the Republic of South Africa's central province, and although in the course of the past decades several books and many academic and other articles have been written on the history of the (Orange) Free State, including on the period 1854 to 1902 when it was a Dutch/Afrikaner Boer republic, several aspects of its history have been neglected.

The articles in this special edition deal with several topics, from religion and education, to architecture and street names. Some of the authors are professional historians, while others are academics and other researchers from various other disciplines. Not many people do research on the history of the Free State and consequently, most of the articles submitted for this special edition of New Contree were written by researchers affiliated to either the University of the Free Sate or the National Museum in Bloemfontein. Some of the articles that have been accepted for inclusion are of a traditional historical nature, while others are somewhat unconventional. But they all contribute towards a better understanding of the Free State's past and present.

The first settlers in what was, for a long time, known as the Transgariep, were the San, the Korana and the Griqua, later followed by Sothos and Tswanas. From about 1820, the so-called Trekboere (i.e. white migrant farmers from the Cape Colony) settled in the Transgariep, and in due course also the Voortrekkers in the 1830s; and on their heels, followed the imperial British forces. These Dutch/Afrikaner (and British and other European) settlers brought with them Western culture and Western views, as well as a new religion. Since the 1820s, first British, and later also French and German missionaries had been active in the Transgariep, but with the Trekboere and Voortrekkers came another variation of the Protestant faith, namely one based on Calvinist principles. In this regard, the Dutch Reformed Church played a central role, inter alia because some 80% of the white population of the Orange Free State belonged to this church.

Piet Strauss's article explores the close relationship between the Dutch Reformed Church and the state in the republican era in the history of the Orange Free State; that is from 1854 until 1902. The Orange Free State government supported the Dutch Reformed Church financially, and the Church itself influenced the policies and actions of the government. The topic of religion continues in Andries Raath's article on the pietistic ego-profile of the pioneer woman, Anna Elizabeth Steenkamp (1797-1891), by looking closely at the two versions of her "Journal". By analysing the "Journal", one gets a good idea of the religious tendencies in the Orange Free State during the nineteenth century, which is then compared with pietism in the Netherlands and Germany.

Although the Free State's northern and southern borders are formed by South Africa's two largest rivers, namely the Vaal River and the Orange River, the province often suffers from drought and concomitant water shortages. Even to this day, from time to time, it happens that a town(s) will, for several weeks, have no water at all. In her article, Marianna Botes explores the provision of water for Bloemfontein in the second half of the nineteenth century. Bloemfontein experienced water shortages as early as the 1880s. Consequently, the Bloemfontein Water Supply Company was founded in 1889 to ensure "water pure and wholesome" for the Free State capital city's inhabitants. The town history theme continues with Loudine Philip's article on the history of the mining town of Jagersfontein. The role that this town played in the international diamond mining industry is analysed. The article also raises the question of the degree of corporate social responsibility that mining companies should have towards the people of the towns they created, and then abandoned.

The Anglo-Boer War of 1899 to 1902 (also known as the South African War) had a devastating effect on the Orange Free State Boer republic, leaving large areas destroyed and depopulated in the wake of the British Army's scorched earth policy and attendant camp system. But in his micro-history of the greater Drakensberg region, Johan Wassermann focuses on identity politics and being a Free Stater during this war. Prior to this conflict, there were English-speaking Free Sate subjects that resided in the Harrismith area, and who had strong ties with the British colony of Natal (the present-day KwaZulu-Natal), while there were Afrikaners who farmed along the foothills of the Drakensberg in Natal, but who migrated seasonally with their livestock to the Orange Free State. The war disrupted the existing identity politics of people in the greater Drakensberg region.

Education has always played an important role in the history of the (Orange) Free State. In her contribution to this special edition of New Contree, Cheryl le Roux examines the provision of schooling for white children in the Orange Free State through the times of settlement to the time of the establishment of the Union of South Africa in 1910. The article traces the role played by the community and parents, churches and the state in the schooling of the youth, as well as the place of language and religion in education. It is inferred that the complex social, political, ideological and economic factors associated with the provisioning of schooling, together with the pivotal issues of language and religion, remain prime issues in multilingual and multicultural contexts.

Although very far removed from the main operational war theatres, the Great (First World) War of 1914 to 1918 also affected the Orange Free State. Several thousandFree Staters joined the Union Defence Forces and fought in German South-West Africa (present-day Namibia), German East Africa (Tanzania), the Middle East and/or on the Western Front in Europe. In May 1915 this war was also brought home when, in the wake of the sinking of the British passenger ship, the Lusitania, there were also anti-German riots in Bloemfontein, as was the case in other South African cities and in several cities across the globe. The extent and consequences of the Bloemfontein riots are analysed in the article by Derek du Bruyn and Andr&eacute; Wessels. It is, amongst others, indicated that almost overnight the harmonious relations that had developed between Bloemfontein's various white cultural groups were shattered, leaving both the German and other local communities shocked, embarrassed and disillusioned. The war had led to tense relations between the English-speaking residents and the local Germans, as well as the somewhat problematic relationship between the English-speaking and Afrikaans-speaking population becoming even more strained.

In the course of the twentieth century, race relations in South Africa became ever-more complex, thus dominating politics in the country. Hannes Haasbroek's article focuses on the agitation in 1926 for higher minimum wages for unskilled black workers. The role played by the Native Advisory Board, the Industrial and Commercial Workers' Union, the Bloemfontein City Council, and other employers, is analysed.

Hendrik Auret traces the historical development of Bloemfontein from 1848 to 2015 by discussing eight maps; that is eight moments in time in the city's history. He points out that maps represent much more than a physical reality. By drawing on Martin Heidegger's ontological concept of care, Auret indicates that the eight maps that he analyses, tell the story of our appreciation of places as regions of concern.

The Free State Province has many impressive buildings (several dating from the nineteenth century), as well as important monuments. Walter Peters and Kobus du Preez address architectural competitions in their article. They indicate that procuring designs by way of competitions is a well-established practice by both public and private clients. The (Orange) Free State has, in its history, seen this method being applied eighteen times: thirteen for buildings or projects, three for monuments of commemoration, and two for ideas competitions. Winning designs may not necessarily always result in the best building or monument, but they certainly indicate the paradigm of the era, and in that sense can serve as architectural barometers.

The naming of towns, buildings and streets (and the changing of existing names) is a contentious issue. Burgert Senekal explores street names as the monumental heritage of academics of the University of the (Orange) Free State, by looking at the road network of Universitas, a suburb adjacent to the University. He applies the network theory, and indicates, amongst others, how and why the University's past Afrikaans character, has been reflected in the street names.

Since 1904 the University of the Free State (UFS; originally known as the Grey University College, and later as the University of the Orange Free State) has played a very important role in the central region of South Africa and beyond. As South Africa has evolved, this University has also transformed in several ways. But how does its students feel about developments in the country? In their article on the sense of shame experience by first-year History students at the UFS, Marietjie Oelofse and Eldrin Vries assess what the level is of the students' historical consciousness, background, insight and in-depth knowledge of South Africa's past, so as to be able to make a judgement on what they are ashamed of in the past events in the country, and the reasons why.

I wish to thank New Contree Editor in Chief, Prof Elize S van Eeden, for the opportunity afforded me in compiling this supplement edition of New Contree on the history of the (Orange) Free State. The assistance provided by her and her editorial assistants is also greatly appreciated. I also wish to thank everyone who submitted articles; all the reviewers for their work; my colleagues in the Department of History at the UFS for assistance with regard to identifying potential reviewers; and in particular Ina Malan who co-ordinated the review process, kept track of all developments, and meticulously assisted in technically editing several manuscripts, and Izette Bredenkamp who assisted me with the editing of several manuscripts. Hopefully, the articles that have been included in this special "Free State edition" of New Contree will stimulate debate and will lead to further research on the history (and related aspects) of South Africa's central province.