TD: 2005 Volume 1 No 1
JavaScript is disabled for your browser. Some features of this site may not work without it. 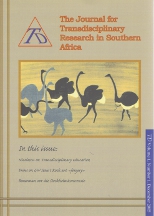 A brief history of transdisciplinary encounters

Transdisciplinary science has been a favourite topic of discussion in the theoretical circles of academia for some time. In fact, the concept of transdisciplinarity was mooted for the first time in 1970 by the Austrian astrophysicist, Erich Jantsch. He was supported by Jean Piaget, who indicated that it was the direction in which science would move in the future. At first there were indications of a reticence. After all, interdisciplinary research was a well-established practice and served functional objectives. Transdisciplinarity, it seemed, was merely interdisciplinarity by another name.

It took more than two decades for the idea of interdisciplinarity to properly sink in. It was at a time, after the collapse of the east-west ideological divide, when rapidly globalising processes required new strategies of comprehension in coping with the problems of reality in a world that had apparently reached the end of history. The future was perceived as a maze of transformations towards liberal democracy that societies in all parts of the globe were expected to follow.

In the philosophical field of science transdisciplinarity now started making more sense. As a methodological strategy, it seemed to fit in well with the proposals for the development of Mode 2-knowledge proposed by Gibbons, Limofes and Nowotny in a collective study that caused a stir in the management circles of universities in many parts of the world. It became a key component in the proposals for the transformation of university teaching and research in a globalising world. One requirement was that knowledge had to be relevant. It had to meet the multifarious demands of the societies in which the information was generated. Behind the scenes governments, in all parts of the world, were actively soliciting support for the new knowledge society that was envisaged. The private sector was a prime target. It was required of entrepreneurs to become partners in the process of generating and effectively using the new knowledge.

Mode 1-knowledge, at the time, was described as that knowledge that had previously formed the basis of classical disciplines of sciences, such as history, philosophy, mathematics, and chemistry and many more. The findings of classical science were seldom required to be applicable to everyday life. In the new dispensation ‘science for science’s sake’ was frowned upon. This ‘esoteric’-type of knowledge generation was considered to be a less than appropriate route of scientific pursuit to follow.

Transdisciplinarity, on the other hand, was perceived as the cornerstone of Mode 2-knowledge. It was particularly in the environmental sciences, where interdisciplinary methodologies had already made substantial inroads, that the first breakthroughs were made. The problem with (traditional) interdisciplinarity was that it basically panned out in two hierarchical levels in which coordination was required to make the progression from lower to higher levels of knowledge. In contrast transdisciplinary research, according to the practitioners, has aspired to set an epistemological challenge to knowledge that is located between, beyond, below or above existing disciplines. This has become the new breeding ground for knowledge of the Mode 2-type.

The new knowledge is more than a mere luxury. Nicolescu explains that the complexity of the demands for knowledge in everyday life have increased substantially in recent times. Consequently it is necessary to create a more direct link between different types of expertise located in a broad spectrum of disciplines. Another important consideration, in the framing of strategies for generating Mode 2-knowledge, has been the ideal of bringing more role players into the process of generating knowledge. The participation of society, at large, is essential. For example, the knowledge of workers on the factory floor is considered to be just as important as the theoretical knowledge of the researcher. The same can be said for the cultural traditions of any given society and also the manner in which the machinery of states function. These are the areas in which empirical fieldwork need to be conducted in the process of generating new knowledge. Previously researchers seldom considered the avenues. The new strategy, in essence, is aimed at bringing scientists and non-scientists together in the process of creating knowledge.

It thus seems as if the challenge of transdisciplinarity is for researchers to forge new partnerships, devise new strategies and locate sources of knowledge that can make new disclosures that would be of benefit to society. This sounds like a tall order. Some scientists would say it is even utopian, or just another way of doing what they have been doing all along. Moreover, many would rightfully point out, it is foolish and short-sighted to summarily relegate classical science to the proverbial intellectual dustbin.

There are many arguments in favour of continuing on the old familiar paths of knowledge. At the same time it is perhaps also worth pointing out that the endeavour of science in all its multifarious contexts is to be a journey of exploration in which new frontiers are constantly opened. Part of its attraction is the prospect of finding out something new. Believe it or not, this still happens in this day and age – and particularly in the field of science.

In South Africa there have been plans afoot to transform the tertiary education sector. In line with what was happening elsewhere in the world, the national commission on higher education reported in 1996:

Considerable progress has been made since then.

The primary objective of TD, The Journal for Transdisciplinary Research in Southern Africa, is to open up new avenues for looking at things differently. There would undoubtedly be space to become reflective, also in the realm of classical science. Without it the future of any knowledge landscape would be bleak.

This journal has the further objective of aspiring to creating a public platform where researchers can share their scientific findings and creative ideas with an academic community, interested in advancing the type of information that can lead us into the future. It should also be an intellectual space where constructive debate can lead to new perspectives and understanding.

Although the focus is primarily on southern Africa, and Africa as a whole, articles on other geographical areas will also be considered for publication. It is important to take note of scholarship in other parts of the world.

It would be appreciated it readers if this edition would be so kind as to forward comments and ideas on the content to gskjwnt@puknet.ac.za. We are open for proposals and suggestions, aimed at improving the quality of the journal.

The editorial policy is outlined in a section of the journal. It should be evident that our approach is one of disciplinary tolerance. For example, the reference system used by authors in different disciplines is respected. It would be precocious to urge researchers to work together and not allow them to use a logical reference style of their choice. We will try and respect it for as long as there is consensus on this element of editorial diversity.

We also have a distinct linguistic tolerance.

A dedicated group of people have participated in preparing this edition of the journal. They have helped us overcome many of the teething problems associated with an undertaking of this nature. We thank them for their support.

We trust that you as reader would also become an active participant in the adventure of exploring new frontiers of learning. Enjoy!