TD: 2007 Volume 3 No 1
JavaScript is disabled for your browser. Some features of this site may not work without it. 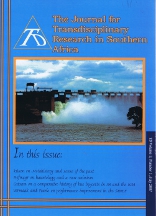 The latest report of the United Nations Conference on Trade and Development (UNCTAD) for 2007 points out that, should the least developed countries (LDC) of the world fail to stimulate technological catching up with the rest of the world, they could well lose track with the developed countries. This implies that they would become increasingly marginalised in the global economy.

Technology for development and growth, with the objective of eradicating poverty, should be seen in broad contexts. It is much more than the mere proliferation of mobile phones among people in the developing countries of sub-Saharan Africa. The type of technology that is of quintessential importance for our continent is that which is to be found in industry and commerce where societal development is a priority. Apart from the improvement in the standard of living that it hopefully engenders, technology should be used for creating an environment of sustainable development that has the interests of humankind, as a whole, at heart.

Much the same can be said about science. Today, as new ways of thinking about science, technology and society are an intricate part of academia, memories of the proverbial academic ivory tower have become steeped in the myth of 'the good old days of yore'.

Science, especially in the developed countries of the world, has to a considerable extent, been integrated into the texture of everyday life. This means that society is informed on what is going on in the world of science. Those ideas then become an integrated part of our knowledge of life and society.

It appears as if, especially in the case of the developing regions of the world (which includes Southern Africa), there is noticeable cultural gap. At the top there is the knowledge of science that is primarily confined to a well-informed minority of people. Below that level, there is another area, where millions of people eke out a life, often unaware of the manner in which science can work to their benefit. For example, developments in the social and economic science field of Public Management and Governance, are often introduced in the workplace, and in isolation, from the realm of everyday knowledge of people at the grassroots level of society. This state of affairs results in misunderstandings, discontent and potential conflict.

What is needed is a form of communication between experts in the field of science and technology and all levels of civil society. There needs to be an environment, conducive for the transmission of science knowledge (in a palatable format) for the lay person. It needs to become an extension of a way of life and understanding in a society that is in a constant process of learning.

The pioneers of transdisciplinary research have, for many years, worked on strategies to incorporate all levels of society in their research. This is considered an important field for harvesting new knowledge - at the coalface of cultural development in society, the economy and politics. If it were possible for trans disciplinary research to open avenues of communicating and transmitting scientific knowledge to a greater number of people in society, it would be a most worthwhile venture.

The writing of South African history is currently undergoing an interesting phase - one of introspection and experimentation. As historians, in a variety of fields of specialisation, focus on a plethora of themes, the content of the past appears to crystallise in a kaleidoscope of patterns and colours. Most evident is the dominant narrative of reconstructing a comprehensible and new form of discourse based on the memories of struggle and conflict to bring to an end the ideology of Apartheid that dominated the country's destiny for the greater part of the twentieth century.

In the past decade there has been a substantive shift in historiographical trends. Some traditional approaches have been entrenched. Others have started out on the painful, but exciting, process of transformation and reinvention, or collapse.

However, under the surface, it seems, as if there is still a lot of unfinished business. In the public sphere, the history of the present seems to be self-indulgent as the judiciary is increasingly called upon to pass judgement on the abuses of political power in the past. It seems at times as if the memorable and important era of the Truth and Reconciliation Commission in the 1990s has now been subjected to historical criticism.

In a country known for its immense human diversity, there is the danger that some groups are not only marginalised, but have been made invisible. Complex processes of acculturation in a changing society have left their mark. Important dimensions of their cultural history have been neglected. One group in particular comes to mind, namely the 'coloured' people (members of the historical groupings of slaves, free blacks and indigenous Khoisan peoples). This has had the effect of turning a blind eye to the origins of suffering, caused by natural processes of hybridisation and adjustment to conditions of abject poverty and destitution under conditions of development. If only we had a more detailed understanding of the historical processes, we might have been in a better position to find solutions for the future. This requires expertise and insight into a wide array of modern scientific disciplines in the humanities, as well as the social and economic sciences. There is a need for greater collaboration between these sciences to locate cultural lacunae in the past, in order to provide a compass to direct efforts at finding solutions in future.

In this edition of TD the contribution of Jam Rusen explores important theoretical issues in history as a discipline. As one of the major international authorities in the field of metahistory, he is in a good position to share some ideas. He has built up a reputation in Europe in the field of contemplating the universals of culture and the manner in which history needs to be reshaped to make the past comprehensible in the present. In particular he has worked extensively in advanced research groups investigating the phenomenon of historical consciousness in a Europe that is moving towards a form of unification in the era of globalisation. He has also, for a long time, worked on perceptions of the past and 'the other' in the East and in Europe.

Readers would hopefully find his views interesting and of value in a country where our understanding of history needs to be rejuvenated in the interest of future generations.