New Contree: 2011 No 61
JavaScript is disabled for your browser. Some features of this site may not work without it. 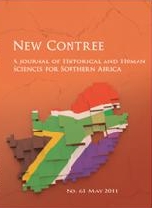 The practise of professional History in South Africa in the past three decades has indeed transformed and is still changing. This reality is also noticeable in the way the New Contree has progressed since the journal’s humble beginning in January 1977, known then as Contree. A local history focus strongly featured and appears to have been very popular among a wide variety of professionals dealing with local history in some way. After 15 years of existence and 30 editions later, 64 articles were published with a local history focus that covered the many faces of communities (for example health, environment, economy, politics, local government, township developments, military activities, religion, social activities, education etcetera). The "scientific" phase of the Journal started when historians of the University of Johannesburg took responsibility for the Contree in 1992 from the Human Sciences Research Council’s section for Regional History. Obligations for the Journal passed on in 1996 to the North-West University’s (NWU) Mafikeng Campus – which was a time that also marked the named change to New Contree that was very much connected to South Africa’s new dispensation – and an apparent need to further expand the definition of "Contree". It was done by accepting broader deliberations on themes of a national value and by supporting scientific contributions in the crossing of disciplinary boundaries through sections of "voices" in the Journal (such as a South African voice, a local and regional voice, an educational voice, a women’s voice, an environmental voice etcetera). Gradually the "local and regional voices" by historians in the New Contree became fewer and fewer as the other voices started dominated the content of editions.

When the NWU’s Vaal Triangle Campus officially took responsibility for the New Contree in 2007, the newly nominated editorial committee recommended that the New Contree’s name should be further clarified in a subtitle to be called "New Contree. A journal of Historical and Human Sciences for South Africa". It is indeed true that this consideration, and previous decisions to change the original name of the Journal, have slowly paved the way for scientific discourse away from being just local/regional history focussed or/and explicitly only historically focussed or/and as a Journal only being produced by historians. No history journal in South Africa vigorously promotes historical dialogue that is multi-disciplinary, and New Contree aims to fill this space. This outlook is timely, appealing, and progressive in a new age in which cross-disciplinary research liaisons have become necessary, even compelling and not just being a bypassing mode. However, it remains an approach that is very challenging and therefore contests the editorial policy of the Journal’s history custodians on a continuous basis. New Contree’s outlook challenges history professionals to set the methodological pace, change the shape, and expand the scope of historical studies. New Contree still supports the original focus of local/regional history, and local heritage history. This is possible alongside contributions on national-related histories of Southern Africa.

This edition of New Contree demonstrates its new approach. There are critical analyses of the military history of the Afrikaner and of the former National Party government. An insightful oral history-based article on the professional connections of the late Professor Ed Munger (Political Geography expert) of the USA as an academic bridge-builder in South Africa continues the Afrikaner theme. This piece on Afrikaners and the establishment of proactive educational programmes for a sustainable South African society after the late 1950’s is well worth reading. A historical overview of the Women’s National Coalition as perceived by Afrikaner women rounds out the Afrikaner theme. The article on the political leadership in the Congress of the People offers a critical reflection on current political issues. Looking back in time, two economic history articles deal respectively with micro-credit and labour union voices and how present-day South Africa could be informed by the past and international indicators. The final article has an environmental history focus on the contemporary and future significance of noteworthy innovations in irrigation technology. Three book reviews are offered. The first discusses the historical and political contributions of Africans in Recasting the past: History writing and political work in modern Africa followed by a review of Harold Scheub’s latest work on oral traditions and storytelling in The uncoiling python . An assessment of New South African Keywords that also notes other reviews of this publication is presented in the third review. In closing, New Contree encourages readers to subscribe as members of the Journal to ensure its continuous and healthy sharing of historically-researched knowledge on Southern Africa.

The New Contree, in a few months, will enter its 35th year of publication. Historians and other professional research associates are invited to submit research that will compliment History as a science; that could cover topics in local and regional history that most of the times feature as multi-disciplinary co-operations; as well as historically founded research from disciplines in other fields. The year 2012 for New Contree could turn out to be a very special year as far as the accommodation of publications in this broad field is concerned.