New Contree: 2011 No 62
JavaScript is disabled for your browser. Some features of this site may not work without it. 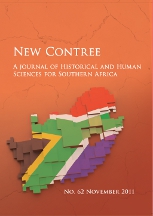 This issue of New Contree offers an interesting kaleidoscope of articles about Southern Africa, ranging from social history to political issues like land reform and women’s rights. Environmental issues in certain regions of South Africa, like water pollution in Potchefstroom and the impact of environmental pollution on human health in parts of Gauteng, are also covered. Apart from the fact that a space for local environmental history from a broad research context is acknowledged, its inclusion also efficiently liaise with the COP17 United Nation’s climate talks in Durban between 28 November to 9 December 2011 and suggestions for more integrative thinking on environmental issues. This requirement certainly also concerns environmental related research in the humanities and human sciences.

The two book reviews are particularly interesting. The first appraises a noteworthy regional and language history contribution entitled The Afrikaans of the Cape Muslims from 1815 to 1915 , written by the late Achmat Davids and edited by Hein Willemse and Suleman E Dangor (published in 2011). In the review of Scott Couper’s Albert Luthuli: Bound by Faith (published in 2010), there are some thought-provoking and compelling alternative and critical reflections on former African National Congress (ANC) president, Albert Luthuli.

Readers are reminded of contributions for the special edition of New Contree to be published by approximately the end of February 2012. With this special edition the Editorial Team will commemorate 35 years of the journal’s existence (see call for articles in this issue).