New Contree: 2013 No 67 (Special Edition)
JavaScript is disabled for your browser. Some features of this site may not work without it. 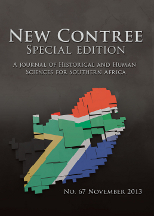 This special issue was made possible by the input of the group of researchers situated within the NRF Local Histories and Present Realities as well as the History Workshop of the University of the Witwatersrand. Prof Noor Nieftagodien, as chair of the NRF Local Histories team, acted as guest editor. Seven articles were produced that will take the reader all over the country into places, and exchanging experiences on topics and phenomena. The Editorial Committee is enormously appreciative of this effort and quality input.

To add some further weight to the contributions by the Wits researchers, two additional peer reviewed articles were selected by the New Contree Editorial team that fits within the focus of the special issue, namely that of Gess & Swart as well as De Klerk. These contributions both echoes an expose of well-sourced, well-argued and well-written research contributions on micro or/and macro history related in ways to the erstwhile Cape Colony.

As Prof Noor Nieftagodien will now continue informing the reader on the rest of the special issue contributions, all that remains from the Editorial team’s side is to thank all subscribers for their support in the past year. Don’t forget to subscribe as member.

Several of the papers in this issue of the journal draw on research undertaken under the auspices of the History Workshop and the NRF Chair in Local Histories and Present Realities at the University of the Witwatersrand. Our research group has an underlying interest in understanding the historical roots of some of the major social, political and economic challenges and conflicts currently besetting South Africa. We proceed from the premise that many of the country’s most acute and refractory social problems have acquired this character precisely because they have deep historical and stubborn roots. A second salient focus of our work has been on “the local”. Conventionally, the idea of “the local” has been deployed in narrow geographic terms. For example, historical writings on segregation and apartheid have tended to make the black location and township their main spatial frame of reference. This body of work has undoubtedly produced a wealth of insights, especially when accompanied by serious engagements with the multifarious experiences of the subaltern. Nonetheless, as recent scholarship has suggested, there has been a decided absence in thinking critically about the idea of the “the local”. Our collective work has engaged in a wide-ranging and multidisciplinary interrogation of “the local”.

The papers in this collection point to two important and overlapping aspects of this corpus of research on “the local”. First, they are influenced by the core idea that space is not inert and cannot be perceived as an empty canvass upon which particular historical scripts are written. Space, and therefore place, and history are mutually constitutive. Second, the idea of “the local” can only properly be understood in terms of its varied articulations with other spaces/places of varying scales (for example, vertically, from local to global, and horizontally, between rural and urban). In relation to the former, as one paper explains, immigrants create networks that are simultaneously rooted in local spaces and connected to transnational circuits of exchange. An additional and related objective of some of the papers is explicitly to problematize popular struggles, both contemporary and historical contentious movements.

These particular papers also highlight some of the most important thematic clusters of our research: Bantustans and their legacies in democratic South Africa, youth politics, popular protests, migration and immigration, and the politics of identity.

While all the papers have a strong historical grounding, they are also influenced by our deliberate interdisciplinarity. Indeed one of our main strengths has been to bring various disciplinary lenses to bear on a set of common questions. Scholars drawn mainly from History, Politics, Sociology and Anthropology have collaborated on all the major research questions that have animated our work over the past few years. For example, analyses of the progress of post-apartheid land reform programmes require an appreciation of the extent to which land rights, patterns of settlement and governance and more enduring values associated with land are rooted and embedded deep in the past. We have paid attention to the re-emergence of traditional authorities and their changing relations with elected local authorities, as well as the effects of this on local governance and service delivery. In the course of this it has become apparent that the former homelands in the interior have suffered from serious neglect in the academy.

It is also evident that the vestiges of the former Bantustan bureaucracies continue to influence politics and the functioning of the state in those areas formerly under their control. Equally important are the regular contestations over the legitimacy of traditional authorities, which are particularly pronounced in a context in which the mutually reinforcing material (mining and land restitution) and political (occupation of crucial offices at different levels of the state) stakes are very high. Popular mobilisation over the unresolved land question and against official efforts to re-impose patriarchal regimes contributes to the political volatility in these areas. The papers on the Limpopo and the North West Provinces highlight some of these processes.

Explanations of local protests, especially the wave of “service delivery protests” that have swept across the country’s poor areas, have generally pointed to the state’s failure to provide basic services as the primary cause, with corruption and internecine squabbles listed as contributory factors. What is less wellknown or poorly understood are the historical roots of contemporary contours of dispute between the political protagonists involved in these struggles. In some cases the origins of these apparent factional disputes may be traced back to the emergence of anti-apartheid movements in the 1970s and 1980s. Analyses of current popular struggles also create opportunities to shine new light on important facets of the anti-apartheid struggles. Some of the most interesting insights in this regard have been generated in studies outside of the main metropolitan areas, which have tended to dominate studies on the liberation struggle. Research in medium and small-sized town in the Free State has revealed important differences in the nature of protests (for example, in relation to participants, periodization, demands and intensity) compared to the major centres.

By focusing on local dynamics, our research has also shown varied and complex relations between the black population and the local state. The dominant narrative on struggle reads black politics as always having been anti-state. This is an interpretation largely influenced by particular moments of heightened conflict, especially in the 1980s. In fact, among the questions requiring explanation is how the local state became so utterly disregarded and despised from the late 1970s, which is partly addressed here.